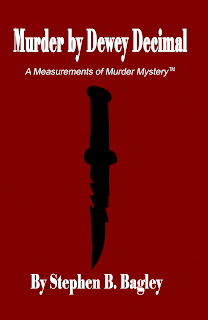 Murder by Dewey Decimal
By Stephen B. Bagley

When Assistant Librarian Bernard M. Worthington finds the body of the dreaded Agatha Ryton-Storer, he has no way of knowing her death will begin a series of murders that will stun his small town and reveal secrets hidden for thirty years. He, roving reporter Lisa Trent, and Police Chief Chuck Donaldson must outwit a ruthless, determined murderer. What was stolen from the library safe? What happened to the missing janitor? Why is Lisa a target? Who stole the Ryton jewels? Why did old Eliah Ryton will his hideous mansion to the city? What secrets does it hold and who is killing to hide them?
Appealing characters, sly wit, clever plot, and chilling suspense mark this first novel in the Measurements of Murder™ series.