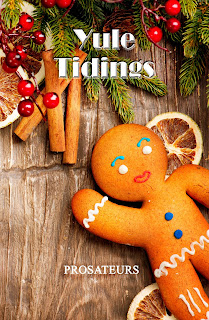 Yule Tidings, the latest anthology from the writing group Prosateurs, is on sale now. The holiday-themed anthology celebrates Thanksgiving, Christmas, and New Year’s with works of fiction and nonfiction.

“Besides making the perfect Christmas gift, Yule Tidings is great for planning your parties and get-togethers, too,” said Kathy Akins, Prosateurs vice president. “We have articles on easy party preparations and, of course, delicious recipes. And the stories, memoirs, essays, and poems will get you into the holiday spirit. It’s the perfect book to curl up with.”

Kathy Akins has won several awards with her poetry, devotionals, and short fiction. Her short stories and poetry have been published in Prosateurs: Tales & Truth, Blackbirds Third Flight, Creations 2015, and Creations 2014. She is a member of Oklahoma Writers Federation, Inc., Society of Children’s Book Writers and Illustrators, and American Christian Fiction Writers. Visit her website at kathyakins.blogspot.com.

Debbie Anderson wrote the suspense novel Friend or Foe in 2018. Its sequel, Predators Among Us, will be published in early 2020. She writes short stories, memoirs, novels, children’s stories, and how-to books. She has been published in Prosateurs: Tales & Truth, Creations 2018, and Creations 2017.

Stephen B. Bagley's latest book is Floozy Comes Back, a collection of humorous essays. He co-wrote Undying, a book of dark poetry. His other books include: Murder by Dewey Decimal, Murder by the Acre, Tales from Bethlehem, Floozy and Other Stories, and Endless. His plays include: Murder at the Witch’s Cottage, Two Writers in the Hands of an Angry God, There’s a Body in the Closet, and Hogwild. His poetry, articles, short stories, and essays have appeared in Prosateurs: Tales & Truth, Writer’s Digest, Blackbirds First Flight, Blackbirds Second Flight, Blackbirds Third Flight, ByLine Magazine, Nautilus Magazine, Pontotoc County Chronicles, Tulsa World’s OKMagazine, Free Star, Dark Prairies & Deep Rivers, the Creations anthologies 2012-2015, and other publications. He is a member of Oklahoma Writers Federation, Inc. Visit his website at StephenBBagley.blogspot.com.

Wendy Blanton wrote Dawn Before the Dark, the first book in a fantasy trilogy, which was published by the Christian fantasy publisher Bear Publications in the fall of 2019. She also co-wrote three fantasy novels, The Dragon’s Lady, Rogue Pawn, and Sword and Scabbard, under the name Elizabeth Joy. Her short stories, articles, and recipes have appeared in Prosateurs: Tales & Truth, Blackbirds First Flight, Blackbirds Second Flight, and Blackbirds Third Flight. She is a member of Realm Makers and Oklahoma Writers Federation, Inc. Visit her website at wendyblanton.com.

Debra E. Chandler’s debut novel, Bone Sliver, was published in 2015, and the sequel, Nova Wave, in 2018. Weathered, a collection of her short works and poems, was also released in 2018. Her short stories, poems, photographs, and articles were also published in Prosateurs: Tales & Truth, Blackbirds Third Flight, The Green Country Guardian, The Sapulpa Herald, and Sapulpa News and Views. She is a member of Oklahoma Writers Federation, Inc. and Oklahoma Bloggers and Influencers. Visit her website at dechandlerwrites.com.

Barbara Shepherd is the 2019 Voice of the Fair Poet, the Poetry Society of Oklahoma’s 2019 Poet Laureate, and recipient of more than 350 writing awards in local, regional, national, and international contests. Her books include: The Potbelly Pig Promise, River Bend, Vittles and Vignettes, and Patchwork Skin. Her writing has also appeared in: State Cops Cooking in the Heartland - More Than We Can Say Grace Over, Candle Flames: PSO’s 70th Anniversary Anthology, Oklahoma Centennial Heritage Collection, Harp Strings, A Centennial Celebration of Oklahoma Stories, travelin’ Music, Elegant Rage, Poetry Is For Everyone, Imagination Turned Loose, Beads On a String–Peace, Joy, and Love, From the Heart of Galaxy, Ain't Gonna Be Treated This Way, and other publications. Visit her website at barbarashepherd.com.

Joanne Verbridge was born in Oakland, California, spending her early life experiences in Northern California. Family brought her to Oklahoma where she enjoys writing memoirs and crafting. She works to inspire her young nieces to take an interest in storytelling and writing. Her memoirs, short stories, and articles have been published in newspapers and Prosateurs: Tales & Truth, Creations 2015, Creations 2014, Creations 2013, and Creations 2012.

Yule Tidings is now available at Amazon, Barnes & Noble, BooksAMillion, Lulu, and other online retailers, and from the Prosateurs members while supplies last. Information concerning book signing dates and locations will be posted here.
at 9:11 AM No comments: