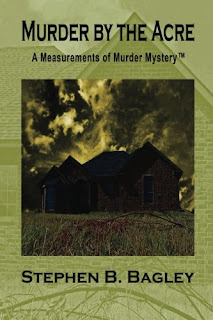 Murder by the Acre
By Stephen B. Bagley

The librarian and the reporter are back! This time Bernard and Lisa stumble on the body of a local jeweler and ladies' man in an underground house. As the couple and Chief Donaldson investigate, they find themselves drawn into a confusing mystery of lies and alibis that involves the upper crust of Ryton, Oklahoma. Questions abound: Who killed him and how? Why doesn't the widow care that her husband is dead? Why doesn't his mistress? What does the mysterious Aventura Corporation have to do with the murder? What is the corporation hiding? Soon events spiral out of control as the killer strikes again and again. As the three dig for the truth, they upset powerful, vengeful people. The chief might lose his job, but Bernard and Lisa could lose their lives in this suspenseful sequel to Murder by Dewey Decimal.